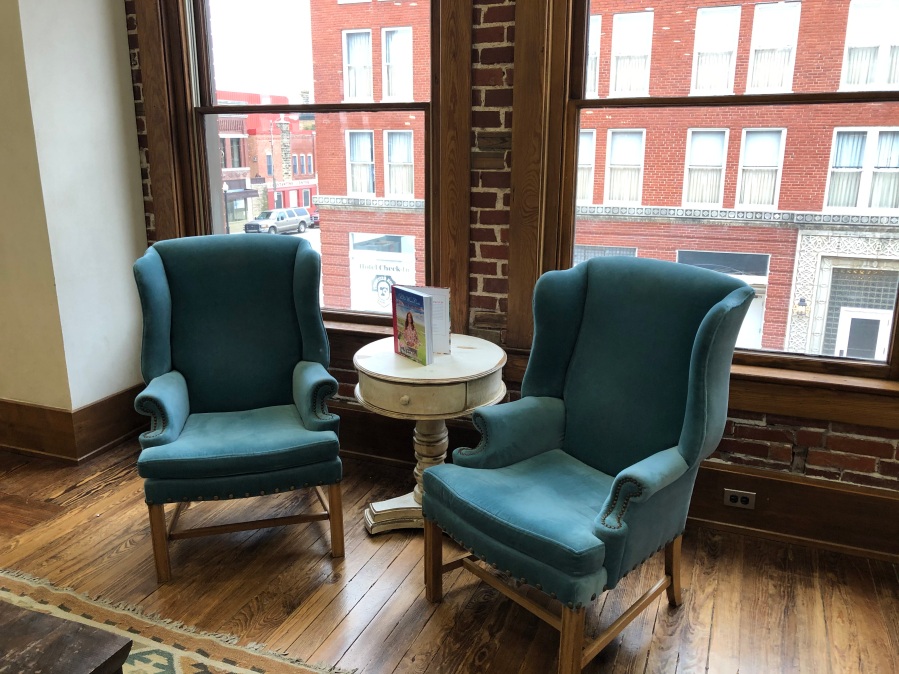 Awww, Katy was in the “Buckaroo” News in her home town. She and several teachers did a parade through town past students homes to honk and wave while they continue to be out of school due to the COVID-19 virus. The fireman led them.

Being that the world has slid sideways, I thought I’d start sharing some of our vacay pics. Hopefully none are repeats but it seemed like I had to skip over some just for the sake of being able to get a blog entry out each day. Here’s some shots from the Mercantile in Pawhuska, at Ree Drummond’s store.

I wanted one of those mugs sooooo bad. But do you know how many mugs we have in the house? I could drink about two months out of mugs and coffee containers w/o having to wash anything. I love cute coffee cups. I. have had to get rid of some of the less favorite to be able to keep the most favorite. But I love these. I just would not let myself do it.

The bathrooms were gorgeous.

I just had to take a pic. It was on silent. But I’m laughing now b/c someone’s feet are on my blog. I bet they have no idea! lol. And there was plenty of TP. No one hoarding in Pawhuska.

I wanted this rust colored top. But it is open in the front. I don’t have a lot of shirts to wear under things like that. I knew it would sit in my closet forever before I ever went out and tried to find something to wear under it. So I didn’t buy it. If it had been a tunic – it would have been mine! I love that rust color though.

I loved the cow pillow. I could have bought up the whole store. And of course I thought of my Nanny Voss because she collected bulls. It was a joke really. Grandaddy bought a bull for his farm and she through a fit b/c they are dangerous. She was afraid he would be killed on the farm. When she said it front of me I burst out crying b/c just the mention of losing my grandaddy…..sent me wailing. He was my big buddy. I think he got the bull. And so did Nanny. Because from then on, everyone gave her bulls for Christmas. lol. She had a curio of bulls. I have her purple head bobbing bull! It doesn’t bob anymore but I have it. As for the pic below. It kinda looks like a bull but not sure if it is.

I took that shot because Katy’s town she lives in, in Breckenridge, the school sports teams are know as “the Buckaroos”. And apparently the newspaper is called that too. You see Buckaroo this and Buckaroo that.

The store was fun to shop in. I loved every minute of being there. I think I shared the meal we had with you already in a previous post. I won’t post again, but the food was excellent.

The upstairs was nice and relaxing and contained a big room with lots of seating and a bakery at the end.

I loved this spot. I could sit here and read and ponder and play games on the iPad. As long as there was a stool to put my feet up. I loved those windows.

Hopefully that brought you some joy. I feel like we all need that right now. Everyone in the world seems to be on edge, stressed, upset, confused, snappy, angered, snoopy, suspicious, accusing, backbiting, slandering, trolling, fussing, worried, selfish, unkind.

If you are lucky enough to find some folks that are in control, appreciative, kind, consoling, understanding, giving, thankful and grateful, God-led, encouragers, truthful, loving, pleasant, righteous seeking, positive, hopeful, spirit minded folk – stick with them because they are hard to find in our worlds these days. I am blessed by the ministers and pastors that give comfort while scrolling Facebook, giving live feeds – because most of our days are filled with negative news, negative results, and burdened with problems and mounting issues.

So news from New York that their peak is not going to be until July? Well, it’s just all over then. I keep thinking when April is over, or June. Now we are hearing July. Because we are going to peak after them right? I still keep thinking the heat of the summer here in the South will kill this protein germ with a fatness around it’s edge. The heat of the summer around here will kill nearly anything but ticks and fleas!

Much to my surprise George was pretty livid about me going in to work. I had no idea he was THAT upset over it, but apparently he had been thinking on it and he was pretty hot about it yesterday. However, he looked up the laws and there are loopholes so not really anything one can do. We both agreed we were lucky to have a job still as we are about the only people, besides the lawyer, that were still working. Everyone else laid off and to be fair, some are retired. His response was “what good does it do for you to be working and then get it and die or give to me and die”. True that. I just told him “look the situation is what it is and we have to trust God on this”. It is what it is. It could be worse. I could be in the medical field. Thank goodness I’m not. I could be laid off. Thank goodness I’m not. It really doesn’t matter what situation you are in, none of it is good.

And to top things off the stress of the situation is making me go into a diverticulitis state. I am having pains this morning and I truly hope that I can squeak out of a full blow attack. I am probably not going to be eating much today. I’ve had too much pasta and bread.

Anyway, I need to get ready, get packed and head on into work to do a check run. I’m just doing the check run to get 8 checks cut and then coming home and doing everything else from here to at least minimize being around others. Do you know how many times I wanted to just bust out crying yesterday? I mean it just gets worse every day. This battle b/w fear and faith. And everything in between. There is so much negative out there that it becomes a struggle to see the light at the end of the tunnel. But it will be there. Yes, it may be the light to enter His holy kingdom for those that don’t survive it, but hopefully we will all get through this. I want to live to see my grandchildren.

8 thoughts on “Trying to Stay Positive in a Negative World”

Welcome to the Blog

Rosemary from George’s herb garden!
Making the front porch a little more special for Mom!
Always love going to Needham’s nursery .Covid kept us away last year. I love seeing the lazy dogs!
Good advice!
Do we too many oils and vinegars? lol 😂
Repurposing the old fondue pot to add green to the “cactus kitchen”…
My Tweets

Mississippi architecture, preservation, old buildings every where, and on occasion, country philosophy and soap-boxing.

Suddenly single again - this is my life, unflitered.

Changing Your Perspective, Changes Your Experience

Tackling the Globe, One Country at a Time

Nanchi.blog
Married to the Weatherman

Not just married to the weatherman

Chambers on the Road

RV, other Travels and Home Life in Retirement

A His and Hers Travel and Lifestyle Blog

Conversations on finding and loving who I am

Let's have an open conversation about life.